Your Local Fishing Charter Specialist - Operating Out of Auckland
Contact

A large fish of northern waters, which moves south in summer months to about Banks Peninsula in the South Island. Its colour is variable in shades of grey-green to blue-green with yellow fins, particularly the tail fin, and there is a yellowish brown stripe along the sides. Its food is mostly other fishes, either bottom or surface kinds. This fantastic sportfish is caught with a variety of techniques including trolling,jigging, livebaiting from shore or boat and flyfishing. Generally the worlds largest kingfish are found in New Zealand and nearly all the world records are held here.

One of the most abundant commercial species in New Zealand. It frequents any kind of bottom to about two hundred metres in depth. Its food includes a wide variety of animals, notably shellfish fastened to rocks and those living in sand and mud. Sea eggs, crabs and other fishes are also taken by Snapper. With a steep head profile, large grasping and crushing teeth, and golden-red colour with blue green spots, make this fish easy to identify. Snapper tends to be New Zealands most sought after recreational and table fish. Snapper may be caught on bait or by jigging with small lures.

This is a predominantly northern species wandering south in summer months to Banks Peninsula and beyond. Normally this species moves in shoals of similar-sized individuals, harrying small fishes such as sardines and pilchards, although any small fishes, crabs, shrimps and squids are taken when available. It enters fresh water, at least briefly, and there takes bullies, eels, smelts and other small fish. These fine light-tackle sportfish will take a wide variety of lures and baits, and frequently jump when hooked.

These distinctive fish are common in northern waters, and may be found in estuaries and harbours, from the shoreline down to depths of about 150m. They occasionally reach sizes in excess of half a metre in length. These thin, deep bodied predatory fish are weak swimmers, and their normal strategy is to stalk their prey head on before shooting out an incredible extending tube of a mouth to suck in an unwary victim. John dory are delicious eating, and although they fight poorly, are a welcome catch to both shore and boat fishermen. They will sometimes take small cut baits, but are most easily targeted by using any small fish as a livebait fished on the bottom. They may also be caught by jigging, with soft plastic lures particularly successful.

Its food is mostly shrimps, small crabs, mud worms and other small animals including brittlestars. It is a silvery white fish with sometimes a brassy flush when alive, and there is a prominent dark “saddle” mark behind the head. The mouth is small, somewhat turned down, and the pectoral fin has one long ray extending back beyond the vent. A popular table species Tarakihi are targeted by boat fishers using small hooks and shellfish, squid and small cut baits. They may be caught over relatively shallow reefs in the north during winter and are also a common catch in more southern waters during the summer.

Our main focus in Big Game Fishing is Marlin, (striped Marlin) around the Northland Coastline. There are Blues as well with the occasional Black caught.

Join the Kiwi Angler for a fishing experience to remember. Cruise out from the Whangaparaoa Peninsula to fish the Hauraki Gulf for some of New Zealand’s best fishing.

A purpose built 12.8m launch, the Kiwi Angler is fast and modern, boasting a spacious fishing area with a full walk-around cockpit. It comfortably fishes 15 people. This is a great day out for a corporate function, or if it’s a sole charter or casual excursion your are after, we can cater for your needs. We offer a full catering service and our onboard barbecue means we can serve up lunch while you move on to catching dinner. This is the freshest fish you will ever eat.

The Kiwi Angler is well equipped with up-to-date electronics for searching out those elusive fish. While the skipper and crews experience and knowledge of New Zealands fish-filled waters has earned them a catch record envied by many. Well take care of everything. Onboard you can hire quality fishing tackle and the bait is the best you can buy, while an ice-bin is provided to keep your catch fresh.

So, if your serious about having a good time and about fishing, call Rex or Lynette Smith to arrange your trip aboard the Kiwi Angler. We will make it one to remember. 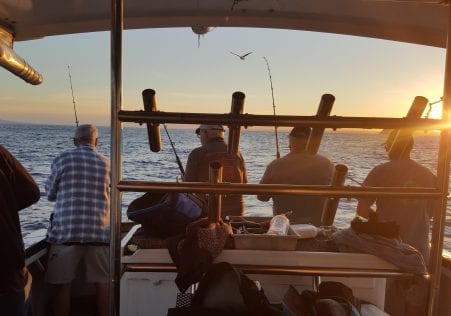 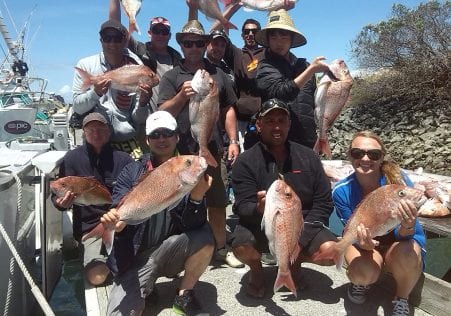 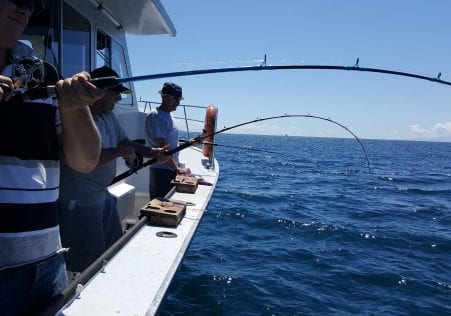 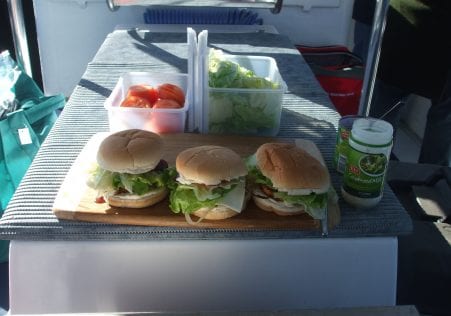 We Provide Catering by Arrangement

Make An Enquiry or

Fill out the form below to get in touch, email us at [email protected] or call us today on